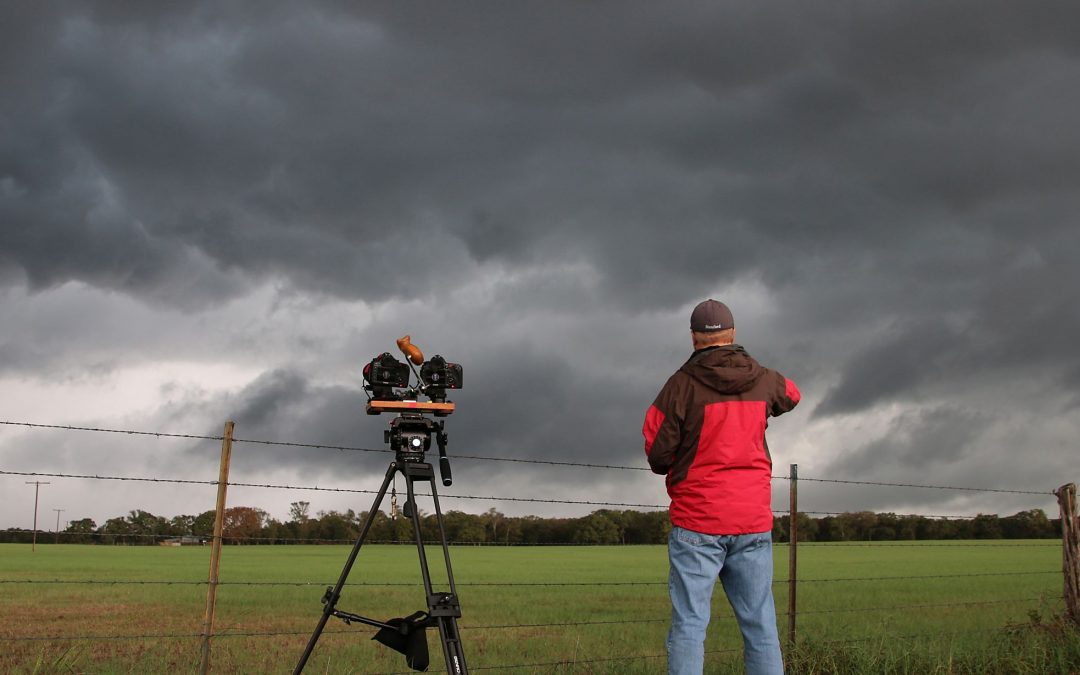 The dog days are upon us, as is Storm Season. We have long been fascinated by Storm Chasing image makers and VC Blog is delighted to have Jain Lemos talk to two of the best. We start this week with veteran cinematographer and chaser Martin Lisius. Next week, look for Jain’s chat with time-lapse specialist, the fearless up-and-coming, Evan Ludes.

Storm spotting is a special art and obsession that leads intrepid souls into the elements to conquer and capture what most of us duck and run from. For veteran cinematographer Martin Lisius and time-lapse specialist Evan Ludes, weather photography is so deeply embedded in their veins they’ve devoted their lives to capturing the art of the storm.

Known as “The Storm Whisperer” Lisius has perhaps some of the deepest knowledge of capturing severe weather in the country. His clients include nearly all of the network and cable news channels as well as major corporations such as Disney, NatGeo, Nike, Chevrolet, Microsoft and McDonalds. Lisius runs his production company from Arlington, Texas where he founded Prairie Pictures and StormStock, a premier storm footage library he started in 1993—making it one of the oldest stock footage brands in the world.

Extreme weather caught his attention when he was 3 or 4 years old growing up in Northern Texas, where storms are frequent. “I remember them coming at night with lots of lightning and crashing thunder,” he recalls. His first image came nearly a decade later. “I took my first storm shot from the big window in our kitchen when I was about 12,” he says. “It was a hand held still photo of a lightning strike that I took with my fully manual Kodak 35mm camera.”

Today, Lisius is equipped with an impressive technology kit, including the 6K Red Dragon that allows captures for over 9x more pixels than HD. “I shoot with an Arri for film, a Red and Sony for high res digital video, and an iPhone 5s for stills,” he explains.

His library includes footage of a vast variety of tornadoes up to the highest EF5 category, hurricanes up to category 5, blizzards, giant hail and floods. “I travel across the Great Plains, from Texas to the Dakotas to shoot tornadoes and thunderstorms, to the Gulf for hurricanes and out to the Rockies for blizzards,” Lisius says. However, he doesn’t have to go far to find diversity. “I can shoot tornadoes, hurricanes and blizzards right here in Texas. It’s the only state in the US that experiences all three of types of storms.”

Even with decades of experience, Lisius hasn’t bagged everything he’s set out to find yet. “I’ve been unable to capture a clear eye inside a hurricane. Every time I’ve been in one, conditions were overcast and usually there is considerable drizzle. A clear eye would be nice to see,” he admits.

With so many other sensory elements going on during a storm, Lisius says it can be challenging to convey the essence of what he is seeing in real time, especially when it comes to sound. “I try to capture everything I feel with certain focal lengths and angles. Using a special microphone system to cut down on some of the wind noise, I can record elements, such as rain and thunder, much clearer,” he says.

“When winds are running 50-90 mph, I get nothing but a roar, though. But that sound is pretty close to what I am hearing with my own ears, so it does extend the visuals in terms of capturing the true experience of being in the storm. During Hurricane Katrina, there was a stand of pine trees nearby, and all I heard for about two hours was the sound of a jet plane sitting on the tarmac. It literally sounded like that,” Lisius exclaims.

Fortunately, Lisius has had very few close calls in the field considering his years of storm chasing. He is very careful in how he tracks and intercepts storms. He has, however, run into situations that weigh on his conscious. “I have shot during killer storms—Katrina and Ike—as well as the deadliest tornado in South Dakota history. I know that, sadly, people are dying around me that I cannot see or help.”

Realizing that storms are very survivable if certain safety rules are followed, he published “The Ultimate Severe Weather Safety Guide” last year, an in-depth guide on how to protect yourself under the most extreme conditions. “I figured out long ago that tornadoes, hurricanes, blizzards and other storms are very survivable if these rules are followed. I wanted desperately to help other people, so I wrote this book with my guidelines. But, the book by itself cannot save lives. People who read it actually have to adhere to the rules,” Lisius says.

Tune in next week for Part Two of Jain’s article and get to know Evan Ludes.

This post originally appeared on the Visual Connections Blog.