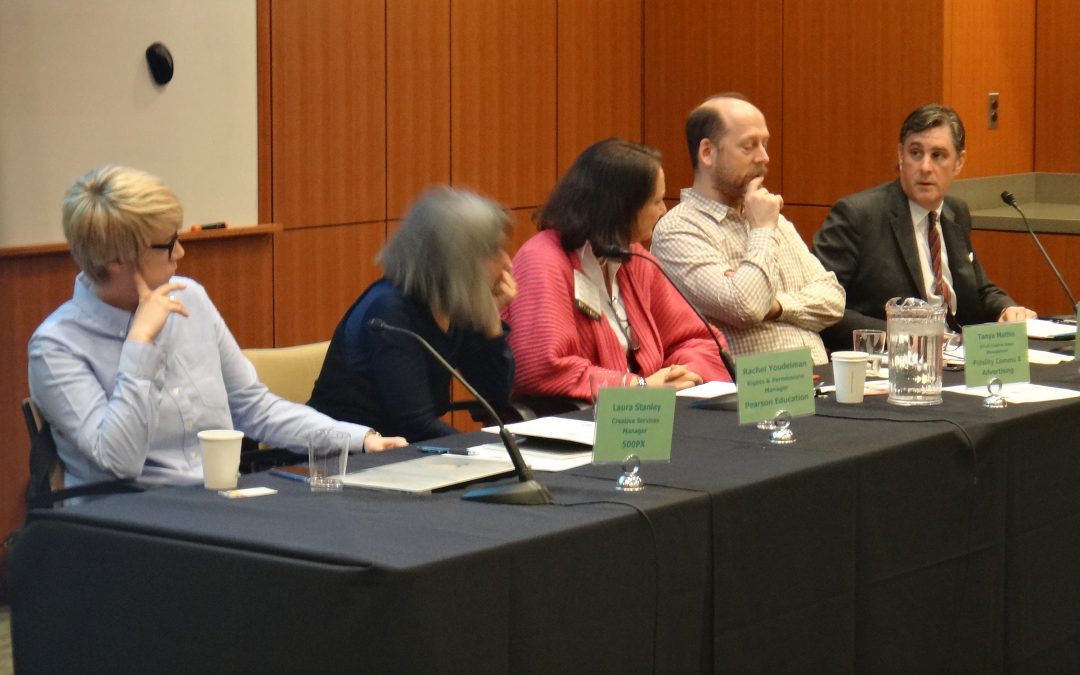 We know the conversation about copyright never ends. For those of us who didn’t get to Boston last month for Visual Connection’s Expo—and for those of you who were able to attend—we continue the dialog. Guest post by Jain Lemos.

Here is a follow-up interview with two of the guest panelists for the morning educational session, “360° View of Copyright: Trends and Technology in Visual Licensing Today,” sponsored by ASPP.

Q: What question evoked the liveliest discussion among the panelists?

Rachel: I was feeling rather lively myself during the discussion on appropriation (I hope everyone else was as well). I recommended a great lecture on the subject titled Appropriation Art, which is available on YouTube. The talk is part of the online CopyrightX course produced by Terry Fisher and colleagues at Harvard University. The series a great resource for all of us working with copyright and you’ll find the full course outline and complete list of video lectures available here.

There was a fairly lively discussion toward the end of the panel discussion when a museum employee who has licensed images to textbook publishers asked me what publishers were doing to “protect” her museum’s intellectual property. Her concerns seemed to stem from reading broad licensing terms found in some publisher contracts. While I explained that the use of her museum’s images is strictly contextual and constrained by the specific terms of the license, others in the audience chimed in on the obvious safety measures, such as password-protected websites.

I’d like to make the point here that part of the mission of a museum is to increase and expand the public circulation of its collection, rather than fixate on limiting it. In my experience, theft of intellectual property in this context is much less a risk than imagined and such fear is a holdover from the incipient days of the Internet. Digital visual culture in the 21st century is entrenched and we all need to realistically manage and adjust to the unstoppable flow of visual information. This leads me back to the subject of appropriation, an area of copyright law I believe will likely become the subject of intense legal focus in the near future.

Glenn: I believe the fair use questions prompted the liveliest discussions. The questions ranged from appropriation art to using an image for a blog or news piece. Since fair use decisions need to be made on a case-by-case basis, the facts are always critical. With that being the case, any fair use discussion generally results in a lively discussion because audience members have many follow-up questions or new questions based on the analysis of the facts and comments from each panelist.

Q: Was there a question that you didn’t get to weigh in on that you’d like to address now?

Rachel: After the conference I realized that it would have been great to mention the growing number of museums which are offering free hi-res downloads and permission-free use of images to out-of-copyright works in their collections. A few such museums are the National Gallery of Art in DC, the J. Paul Getty Museum in Los Angeles, and the Rijksmuseum in Amsterdam.

The question of manipulation of images, of incorporation of 3rd-party images into works of illustration, and other uses of photographic works which may be considered appropriation, was raised a number of times. If you are a photo editor or art buyer it might make sense for your illustrator to select an image which is in the public domain if one is needed to work into an illustration of some kind. Currently, the number of sources from which we can select a truly public-domain image is growing. I’d keep my eye on museums as more announcements from a variety of museums are made about images being released into the public domain. However, I would also be mindful that when using an image from such a source that the moral basis for copyright law makes attribution imperative. I can’t stress enough how important it is to give proper credit to both the artist who created the original work and to the museum who provided the image file for all licenses and uses.

Glenn: There was a question by one audience member regarding licensing images to publishers and the broad licenses that they require. I think it is important for licensors to know that many licensees (including publishers) are requesting such broad licenses to protect themselves from issues down the road if someone years from now doesn’t check the permissions and uses an image beyond the terms of the license. That being said, depending on the images being licensed, a licensor can certainly discuss restrictions on how certain images can and can’t be used. I think copyright owners sometimes forget that it doesn’t have to be an “all-or-nothing” license. One of the first things I learned as a lawyer was that everything is on the table during a negotiation. The other side might say no, but you can always ask and negotiate for language that is different from the “boilerplate.”

Q: Did you learn something new from your fellow panelists?

Rachel: Yes. Laura Stanley from 500px mentioned that her picture agency issues “social media” licenses—a type of license I did not realize existed, though almost anything is possible contractually. The question came up, for example, of the need for permission to post a photo of a celebrity to a corporate blog in order to honor the celebrity’s birthday. If you have no license to publish a copyrighted image or other graphic asset—on any platform in any context—it’s best to refrain from publishing. As Glenn Pudelka mentioned, if you claim “fair use” you should be absolutely certain that your defense is watertight. I was interested to learn that some of Glenn’s clients may seek him out because they organize their defense too late, take too much risk, and need Glenn to clean up. Also, in chatting with Glenn before the discussion began, he corroborated my own opinion about the February 2015 College Art Association (CAA) pamphlet, Code of Best Practices in Fair Use for the Visual Arts. Effectively, it changes nothing regarding interpretation of the law. There may be a bit of wishful thinking on the part of the CAA behind the pamphlet.

Glenn: I learned a great deal from my fellow panelists. As an outside attorney, I’m always learning from people within companies that deal with situations on a day-to-day basis. For example, the whole RF vs. RM discussion was a great learning experience for me. One of the panelists said that her company’s focus is on RM images rather than RF since they want their materials to be different from other organizations and not use the same images within their materials.

Q: What is your take on sharing licenses?

Rachel: What people are calling social media or sharing licenses stem in part from the Creative Commons licenses. The misnomer is that sharing always means free. There are several types of them and it’s imperative that buyers read the fine print! Textbook publishers are circumspect when it comes to these types of licenses and we typically avoid them because the terms in some of the licenses can leave just enough room for misinterpretation. That said, on rare occasions some of us may use images that are marked “Attribution” but not “Attribution-Share-Alike.” We would not use anything which includes restrictions such as “no derivatives” or “no commercial” use. But we would be more likely to contact the rightsholder as identified in the “sharing” license and ask that person to sign our standard license.

Glenn: Sharing Licenses (e.g., Creative Commons licenses) can be a great way to use the copyrighted works of another, but the key is to read the requirements of the license and make sure that you follow them. Often these licenses can be very vague and broad (which can be good), but require an attribution credit if you use the copyrighted work or further require that the work that uses the copyrighted work must also be licensed under a shared license. Failure to adhere to the license requirements means that you are not properly licensed and could expose you or your organization to an infringement claim. I think organizations are also often concerned about using shared licenses because they don’t want to accidentally have their copyrighted content get captured by a shared license that makes it available to others.

Q: Back in your offices, what types of permission and copyright issues are you dealing with in your day-to-day workflow?

Rachel: Because it is impossible to predict new delivery platforms, most textbook publishers now use licenses with terms that are broad enough to account for the huge variety of current and future delivery platforms that require global distribution. For example, electronic books simply used to be PDFs of a print book, posted on the Web. Within the last several years, we have seen numbers of different electronic delivery platforms including smartphones, tablets, apps, Kindle software as well as new types of digital products and their ancillaries. In my view, the broad licensing terms are in the author and contributor’s interests as well as the publisher’s, because they preclude nearly all compromising situations. Currently we are seeing new issues regarding linking from within the publisher’s digital product to an unrelated site. These kinds of issues can be complex and call into question a variety of permissions scenarios.

Glenn: The most frequent types of permission/copyright issues I deal with on a day-to-day basis generally fall into two buckets (both of which are what you would expect). The first bucket deals with either the use of an image or work without any license at all or in a way that exceeds the scope of the license/permission that the user has. I deal with both owners who feel that their work is being infringed or organizations that have either received notice that they are infringing or realize that they may have exceeded the scope of their license and want to know what they should do about it.

The most interesting questions I get day-to-day, however, come from the second bucket—when clients want to use an image or work and want to discuss why they think they can rely on fair use and not get permission. These projects/conversations are always very interesting to me since I often can’t give them a yes or no answer with 100% certainty. I can discuss relevant cases that have similar facts and then the client and I discuss the risks and the client’s risk tolerance.

Many thanks to Rachel and Glenn for sharing their valuable time and expertise!