To Live and Die in Tombstone 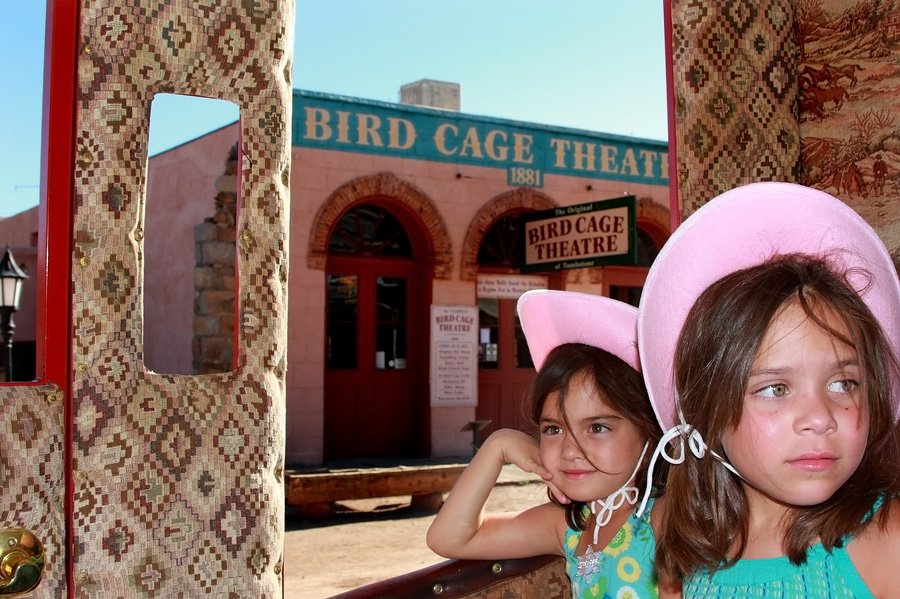 Come for the Silver, Stay for the Gunfights: A Day in Tombstone, Arizona

Text and Photographs by Jain Lemos for NewsPlink magazine 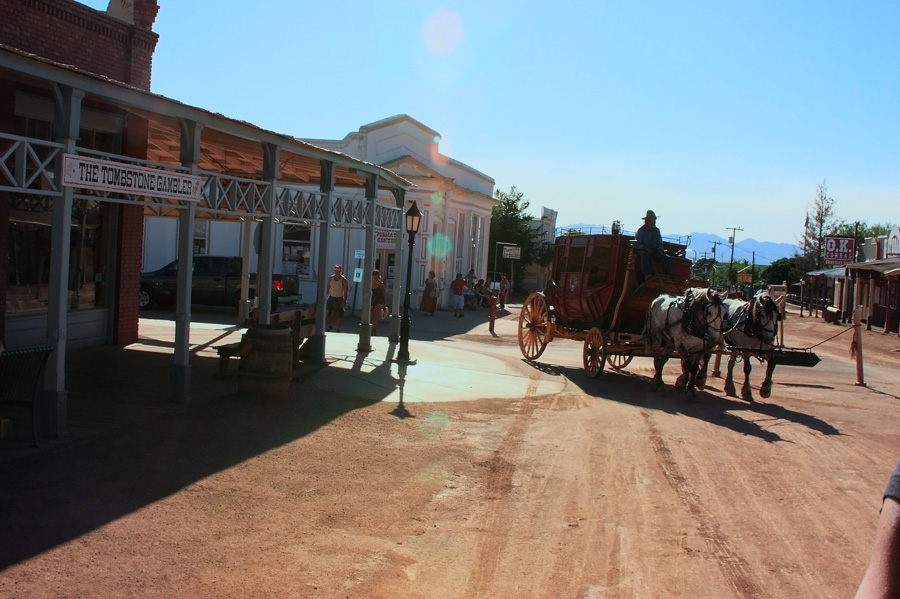 Fire ripped through “The Town Too Tough to Die” in 1882, but 127 years later thanks to tourism, life in Tombstone, Ariz. plods along.

(Tombstone, Ariz.) Many Arizonans think of Tombstone as too touristy. They wouldn’t be caught dead here. But plenty of life still clings to this collection of one and two-story structures spread out on a little grid of wide streets in southern Arizona.

And why not? It’s got a killer name; that alone draws curiosity seekers. And for a recession-era destination, it’s great: there’s no admission fee to enter the town. Families enjoying a stay-cation don’t mind driving a couple of hours to get here from Phoenix or Tucson.

A parade on Allen Street circa 1881, on the same main drag as shown above. (Photo: Kansas State Historical Society/W.B. Shillingberg)

Tombstone has had a turbulent past. There’s plenty of historical lore for anyone who is interested; all of it started with the discovery of silver in 1877.

The town was supposed to die in 1881, when the gunfight at the O.K. Corral exposed the dangerous feuds between the roving “cowboy” gangs from the south, and the immigrants and investors from the north. 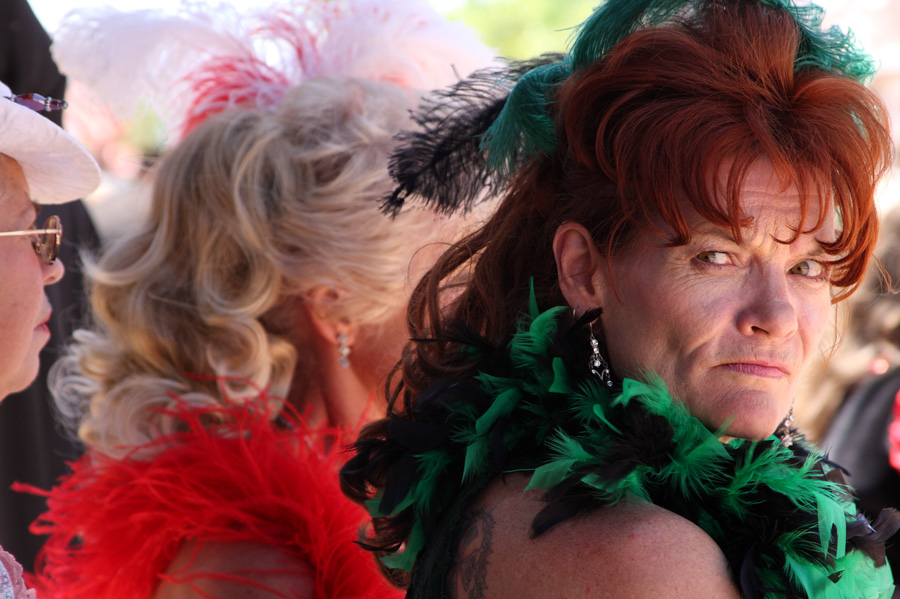 Character players in 2009 look tough enough for the Tombstone of 130 years ago.

The town was again supposed to die in 1882, after fires pretty much destroyed the place. 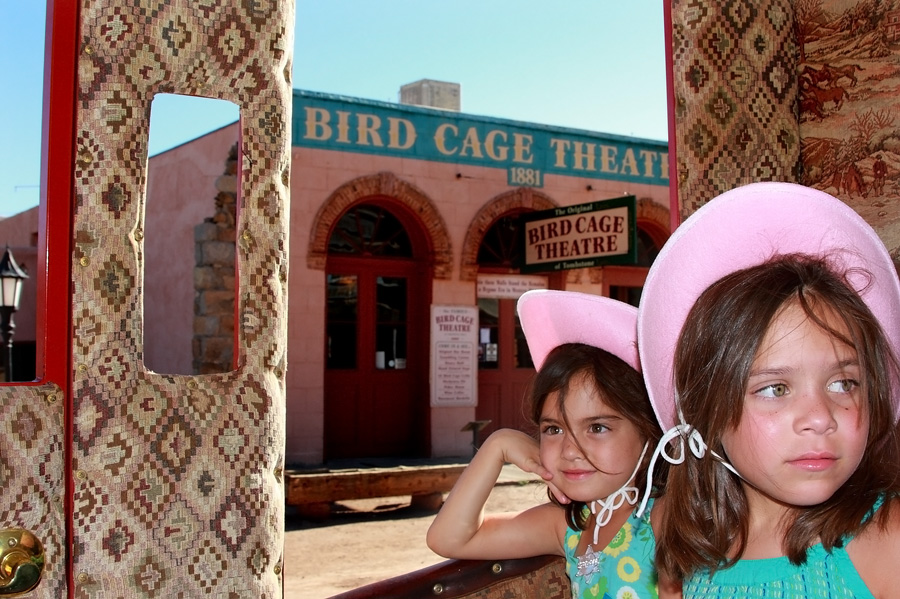 The town sells not just stage coach rides, but bonnets, too.

It didn’t take long for locals to realize that tourism would help Tombstone stay alive. Buildings that were burned were rebuilt. The notorious gunfight at the O.K. Corral is still endlessly dissected; daily reenactments have been held for visitors’ pleasure for decades, at least since the annual “Helldorado Days” festival, held since 1929.

These reenactments employ varying numbers of actors, who find work with competing repertory companies. Barkers drum up business for stagecoach and mine tours. They hand out coupons, alert customers of coming “gun-fights,” and promise cold beers and sarsaparillas inside the saloons. 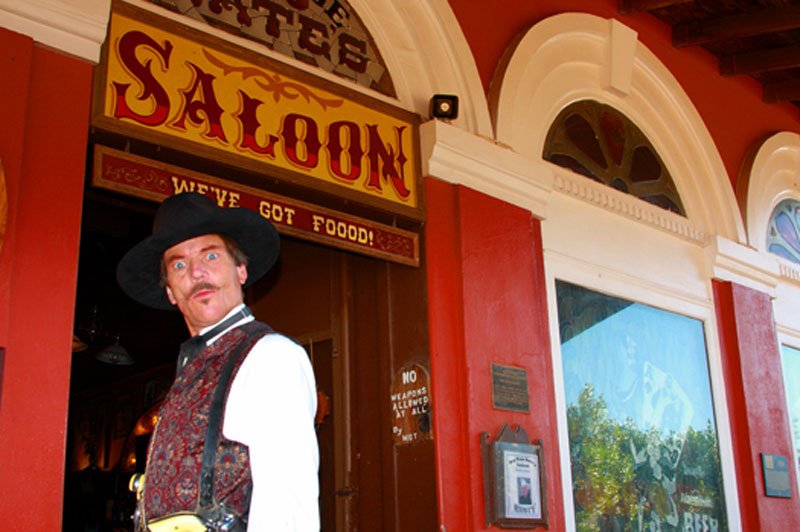 Barkers know how to lure in customers.

Of the 1,700 or so year-round residents, some of the rest are service professionals, or they work for the city or mom-and-pop establishments. There are no national chains here.

This past January, former First Lady Laura Bush announced Tombstone had been designated a “Preserve America Community.” Tourists don’t seem to mind that the town isn’t as authentically preserved as it could be, and that stucco and tile have been mixed in with the wooden storefronts. 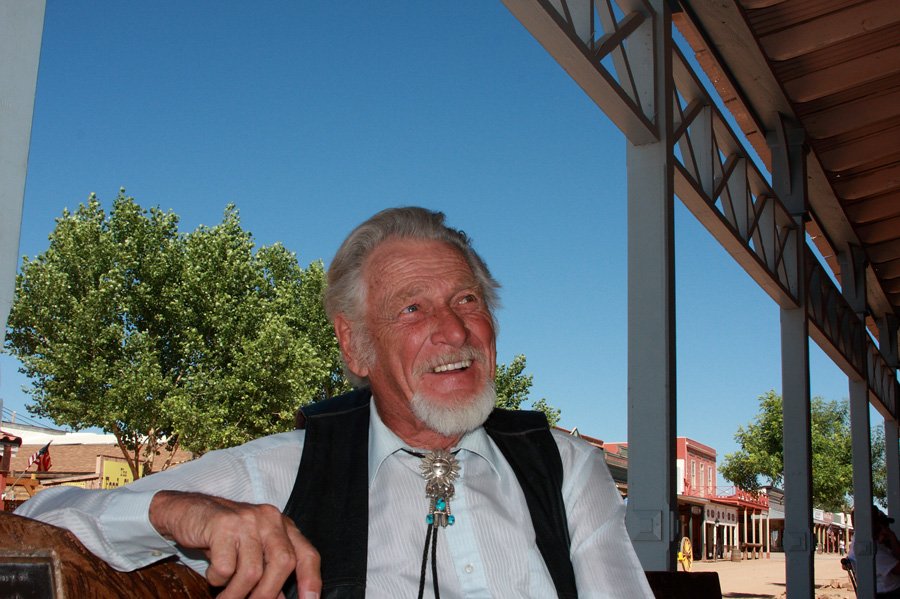 Richard, 85-year-old veteran actor of stage, film and TV sits for a spell. His one-man show as Abe Lincoln ran for five years nationwide. He happily spends his days sharing history and reminiscing, admitting “It sure beats being in a rest home.”

During the day, saloons, restaurants and shops are swarming; Tombstone’s official web site claims 400,000 tourists come each year. After sundown, the locals take over the establishments. It creates an unusual community. 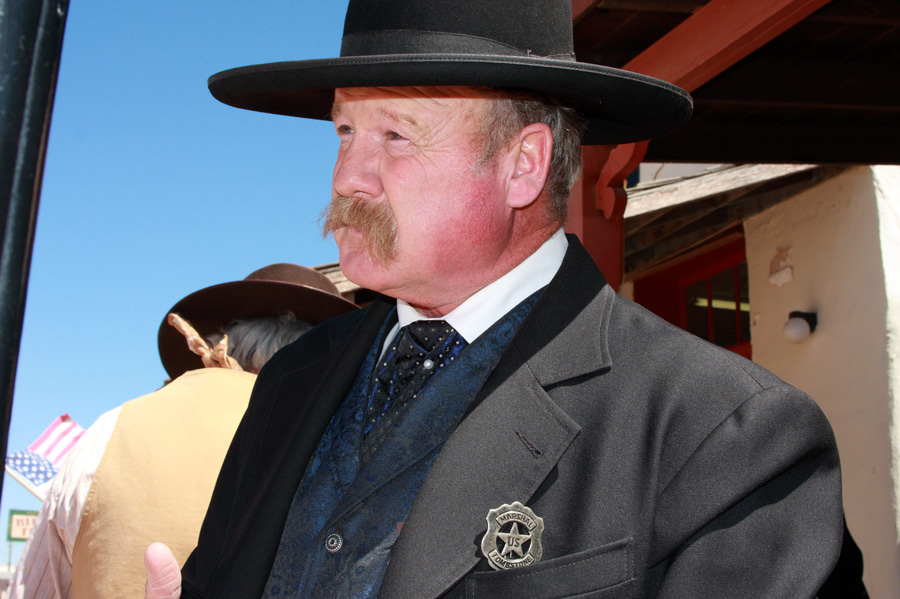 “Hell, Wyatt Earp wasn’t the only Marshall this town’s ever had,” explains this lawman.

A few months ago, Leah, a local server at the Six Gun City Restaurant, suffered a heart attack during her shift. She isn’t yet 30, but was in dire straits when no ambulance was available. An actor’s wife later said Tombstone officials had sold it to the nearby city of Bisbee. (Leah, she said, was airlifted to Tucson and received a pacemaker.) 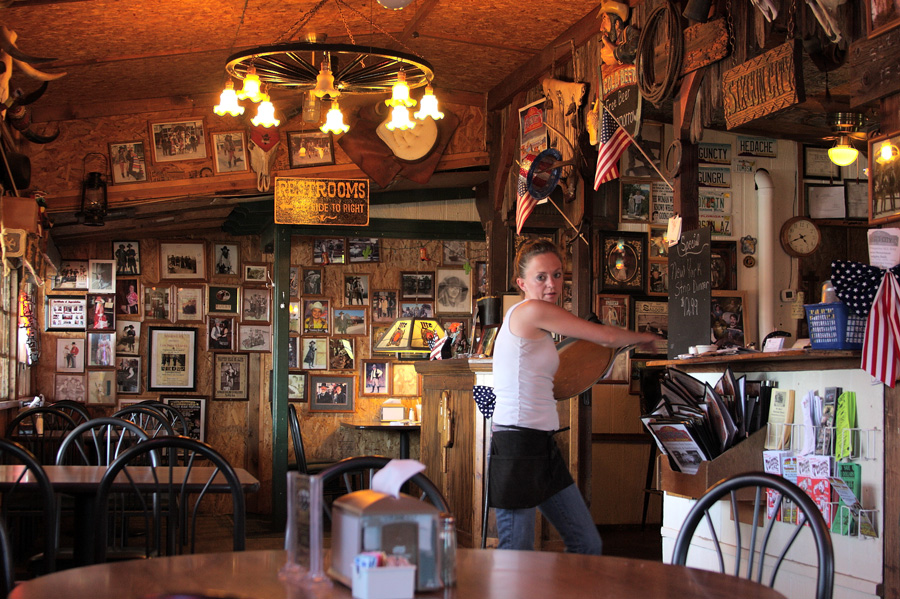 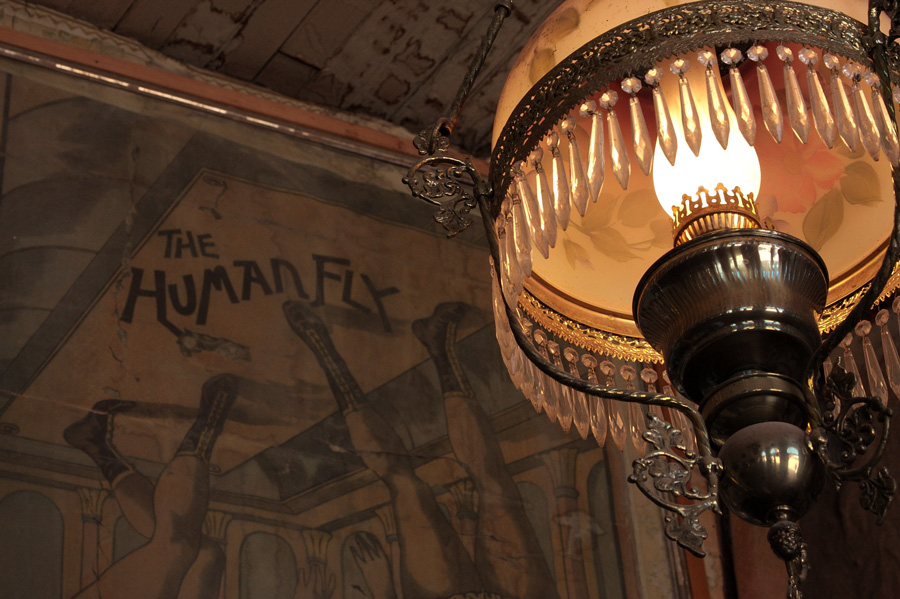 Vaudeville shows often included acts such as The Human Fly using a vacuum-like apparatus, as touted in this poster in a shop on historic Allen Street.

Daniel Raphael lives in Tucson and moonlights in Tombstone on weekends. He sized up Tombstone politics as “crazy.” He pointed out two blocks of the main drag, Allen Street, where the pavement was deliberately strewn with grit and sawdust.

“Some folks like having ‘authentic’ dirt streets,” he noted. “But bikers complain because it stops them from parking their hogs in front of the saloons.” 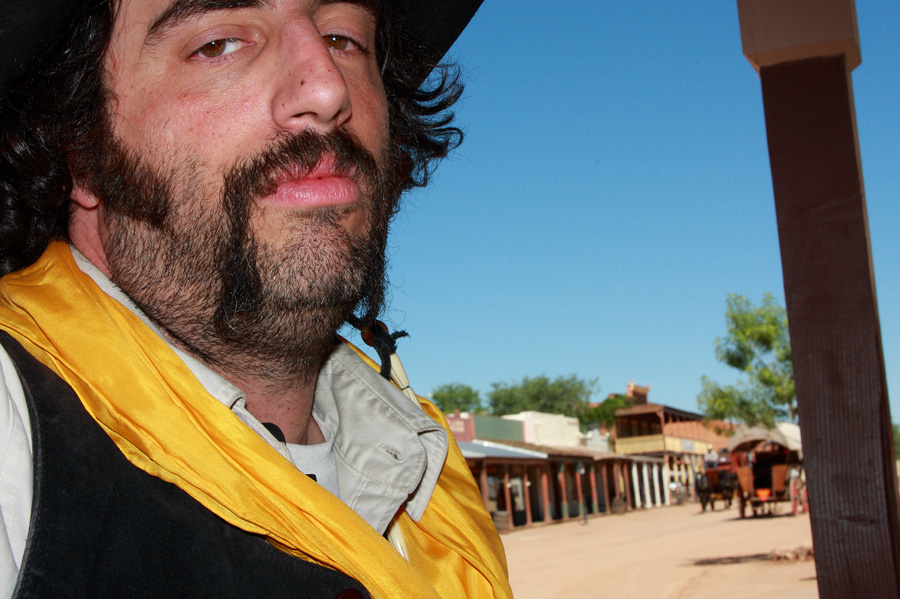 As a consequence, he explained, “That means less business. So the mayor wants to paint the streets a dirt color.” 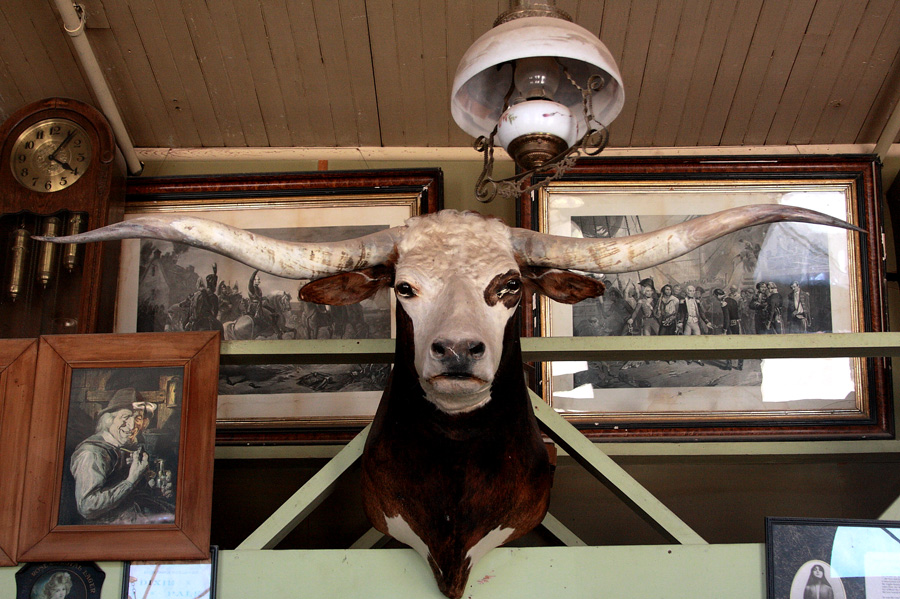 “They don’t stuff ’em like they used to,” says the proprietor of Lefty’s Corner Store, a popular souvenir shop.

Anita Turner of the Tombstone Chamber of Commerce claims that tourism is up in 2009—there are about 500 visitors per month more than the average of the past two years. Her analysis explaining the positive trend?

“More advertising,” she said, “and several of the cable channels ran Tombstone again.” 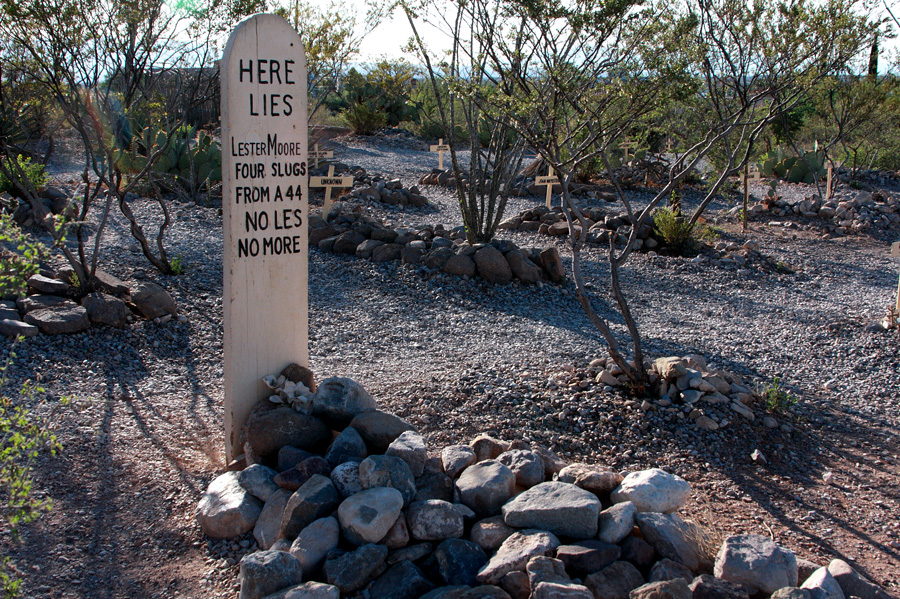 Townsfolk helped preserve old Boothill cemetery where the graves have been spruced up but mysteries are still buried deep in Tombstone.