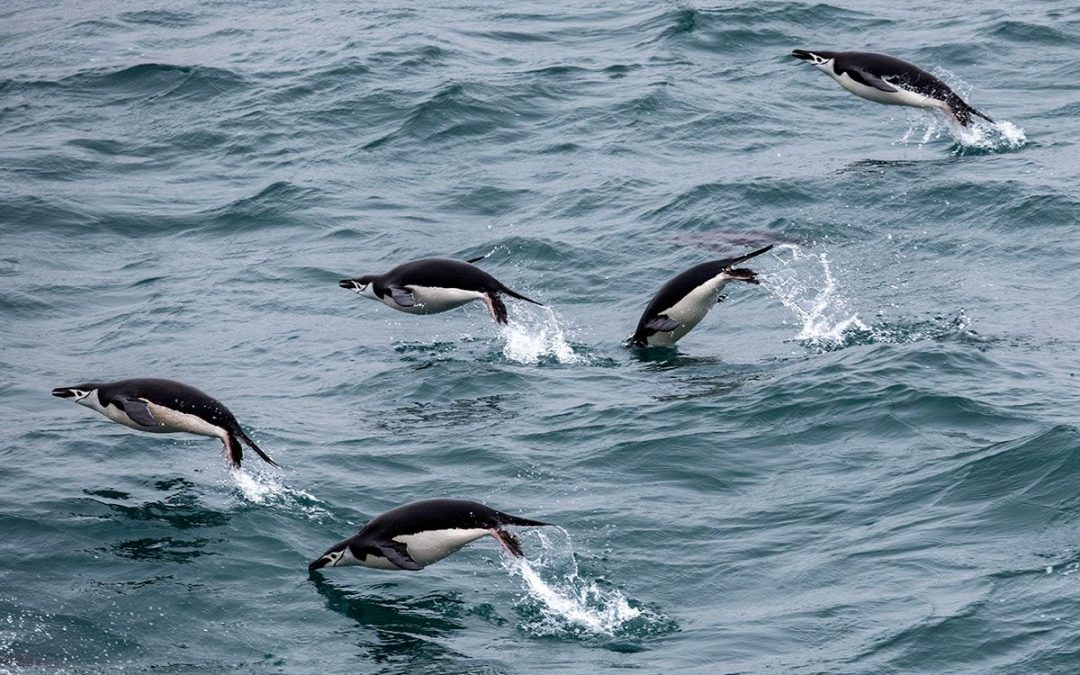 Photographer Cindy Miller Hopkins captured an extremely rare instance of five penguin species together in the South Sandwich Islands, a shot that is poised to have a major impact in safeguarding globally significant wildlife in the South Atlantic. 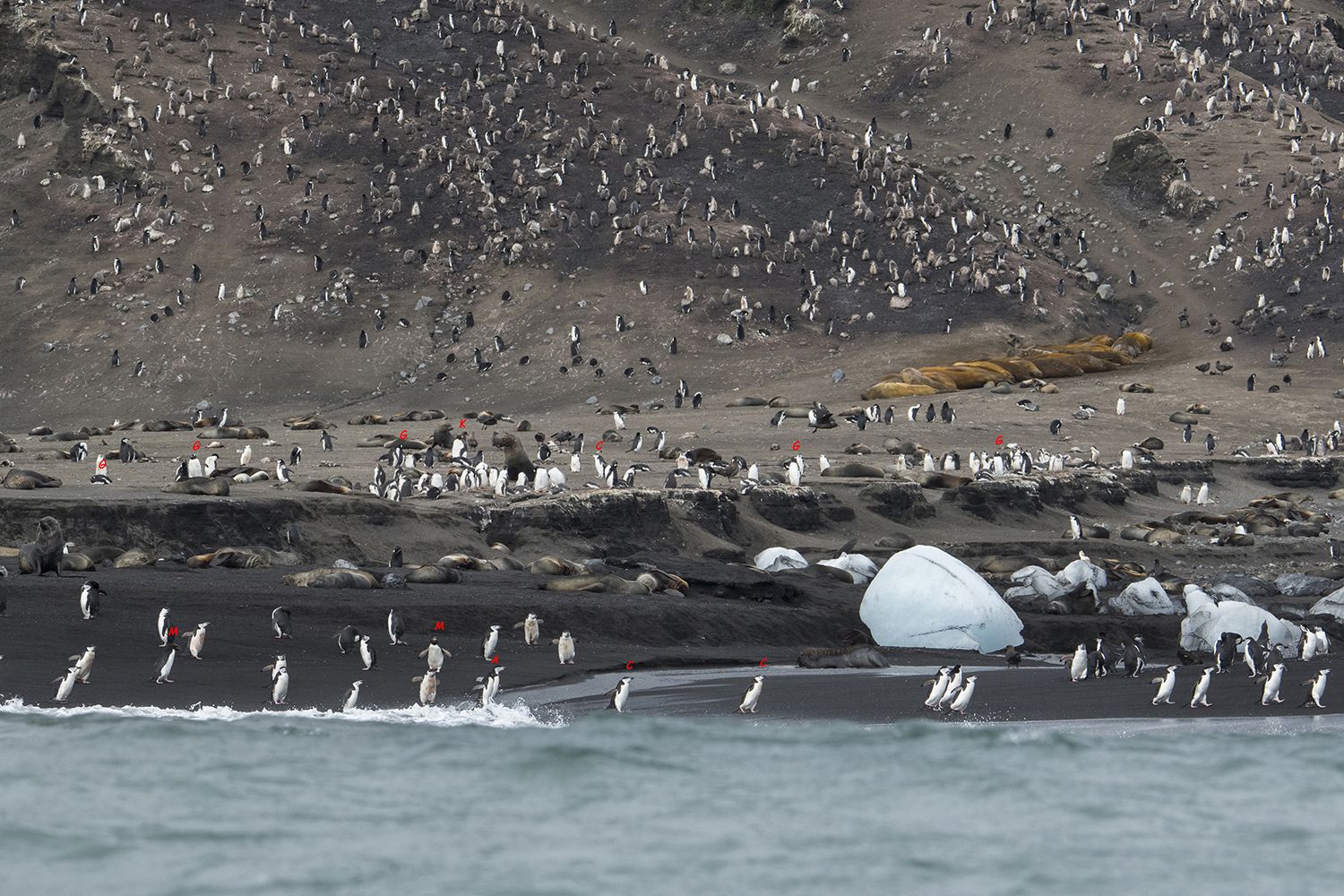 HEADING INTO THE ANTARCTIC SCENE the first time several years ago, photographer Cindy Miller Hopkins braved the harsh unknowns with anticipation of the ultimate adventure and the chance to notch her belt with images of massive humpbacks and cracking glaciers. On this voyage in late January 2018, as she set out from Ushuaia, Argentina, she was ready to relax into the stillness and majesty found in no other place. What she didn’t know is that her timing and skill would lead her to capture a life-changing moment for herself and the landscape she has fallen in love with. 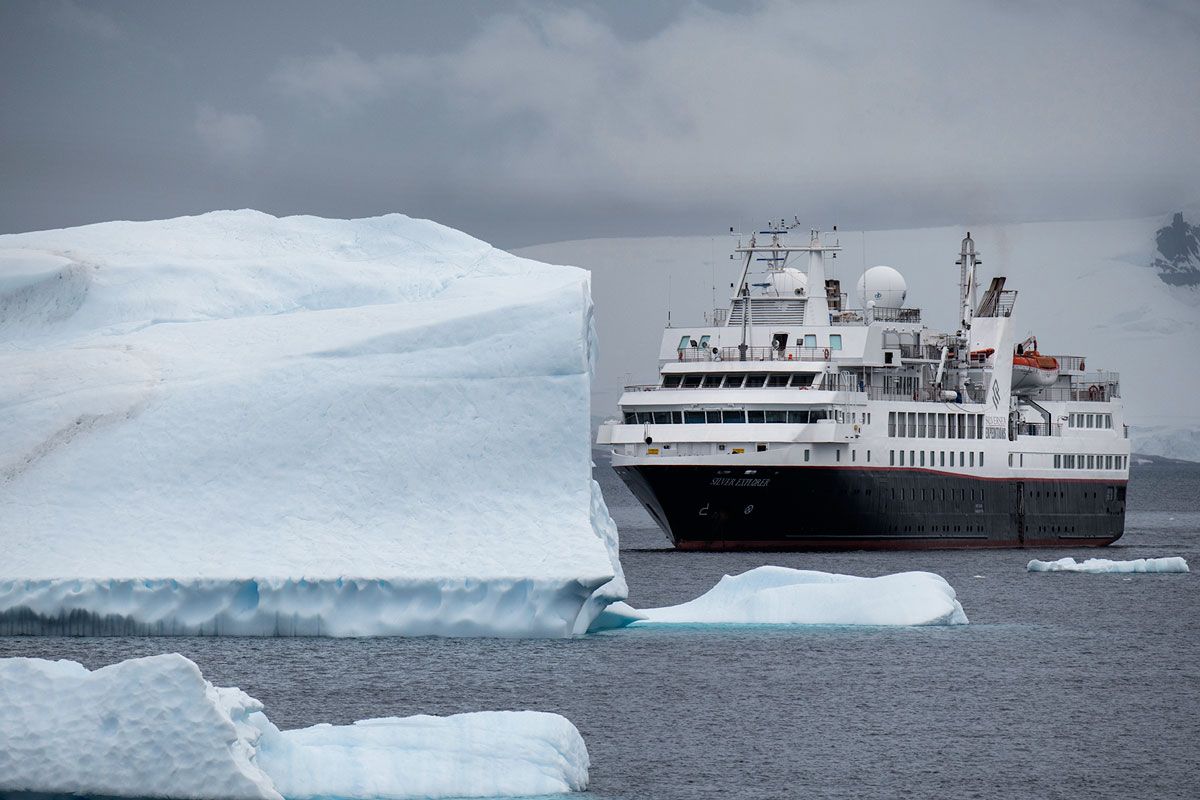 The 24-day Silversea Explorer trip took a route through the Falkland Islands, followed by several days in South Georgia. After a day at sea, the ship arrived in the South Sandwich Islands (SSI), a chain of uninhabited smaller landmasses. Before dawn on February 4, Cindy greeted the early summer morning and ran through her mental and paper lists of preparations for the day’s coverage. In a few hours, a small group, assembled in a large inflatable raft, navigated as close as possible to the black lava beaches to study the diverse wildlife mingling together on the acrid smelling rocks and sand.

This was the first major trip with her new 35mm Nikon D850, a camera with extraordinary resolution and outstanding dynamic range. By 8:00 AM, the low sun had started to break through the cloud coverage, and the raft steadied itself just off Saunders Island, positioned in the middle of the chain. She set up her equipment, choosing an 80-400mm lens. The scene was typical for that part of the world. But for Cindy, it was anything but ordinary. Seeing a remote volcanic beach covered with penguins in a place that less than .01% of the world’s population would ever see firsthand would always be extraordinary through her eyes. The penguin population did seem a bit sparse, but healthy. Checking on her first few frames, Cindy was delighted with her new Nikon’s ability to capture incredible detail. 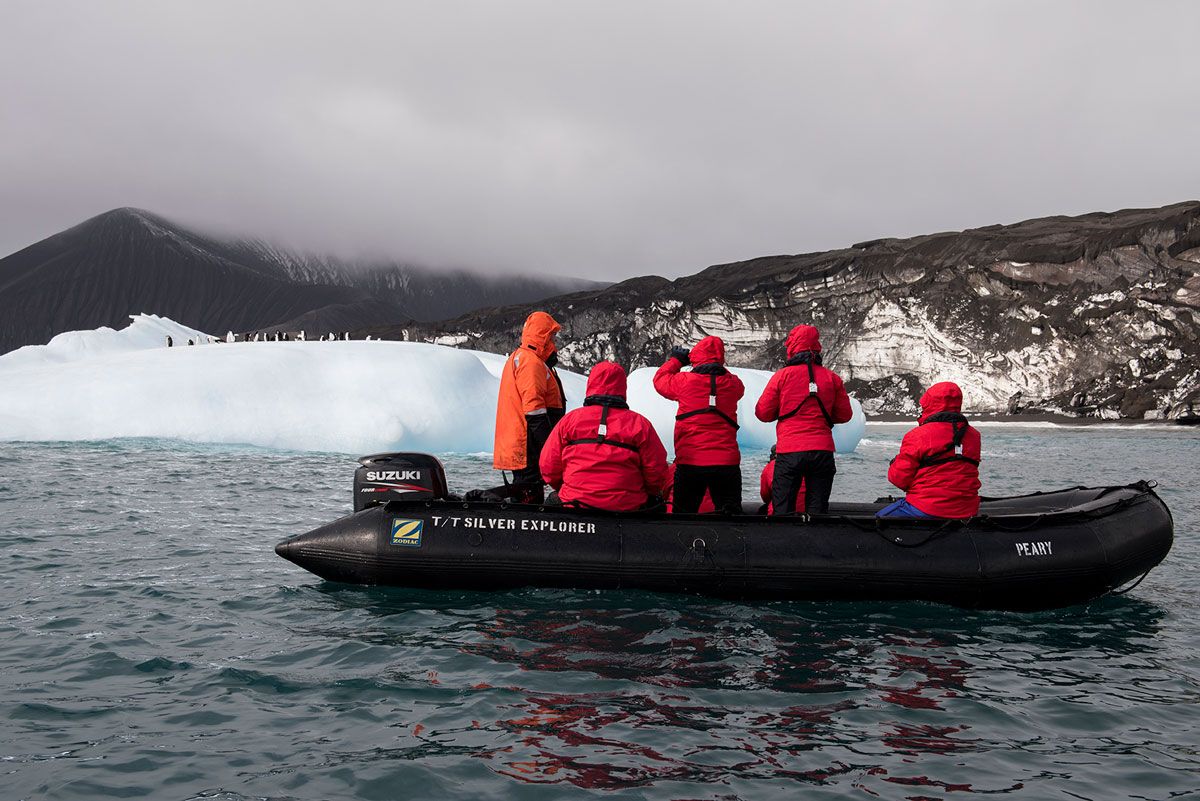 Exploring in a zodiac looking at penguins on iceberg off the coast of Saunders Island. Photograph © Cindy Miller Hopkins.

That evening, Cindy settled into her cabin to edit the day’s images. She took special note of each species, so she could caption and keyword her photos. The plentiful, indigenous Chinstrap and Gentoo penguins were easy to identify. Then she spotted an Adélie. Then, a Macaroni. When she saw a King standing there as well, she did a double-take. Having five different species together in the same frame was something out of the ordinary. Cindy showed the image to the ornithologist onboard and he agreed—this was both unusual, and exciting.

As the ship headed on toward the Antarctica Peninsula, Cindy poured over her shots again and again. Her camera’s full frame sensor and 45.7 megapixels were perhaps the only reason the distinctions of each penguin trait could be extracted for review. She wondered exactly how rare her sighting was and why the King and Macaroni would be so far outside their normal habitats.

Three days later, I received an email with the subject line, “I have a little research project for you.” Knowing Cindy is out of the country 200-plus days a year, I figured she wasn’t home in Colorado Springs. I also know that Internet service is a precious commodity in many of the remote locations she visits so I thought she probably needed me to look something up for her. Her note went on:

“We recently visited the VERY remote South Sandwich Islands. I took a photo on the islands that shows five different species of penguins all on the same beach. The ornithologist thinks that it might be a significant image for scientists, as he does not know of any other place in the world where five types of penguins can be found in the same place and time, and it is so remote here there is just not much info on the area. Can you find five (or more) species of penguins in other places in the world?”

Well, I sure didn’t know the answer. I started by downloading a chart showing the world’s penguin types. For the rest of the day, I searched nearly a dozen stock photography sites, starting with the National Geographic Collection and Nature Picture Library. I moved on from there until my eyes were swimming in tuxedos. I found no pictures of five species together; in fact, it was difficult to find even two species in the same frame. Next, I moved to academic databases and found no images—or mentions—of five types of penguins co-existing.

Realizing I needed a full brief of the details in order to elevate my research, I asked Cindy to give me all the specifications. I asked her if she was sure she was seeing right, because it seemed unlikely. “I know my penguins,” she quipped. She sent me a low-res version of the image with the species marked. I was able to determine that there are a few colonies on the South Shetland Islands—approximately 850 nautical miles to the West—where the distributions of all three Pygoscelis species overlap and they breed together. But that didn’t count for the two stragglers.

I prepared the following brief that I sent to several experts: 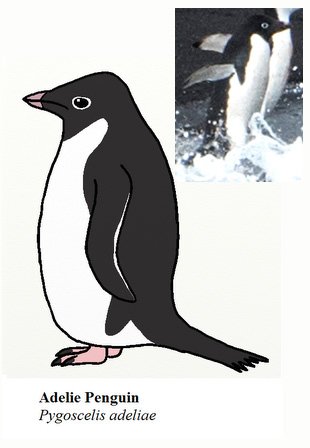 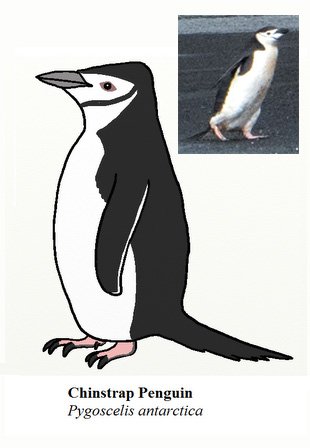 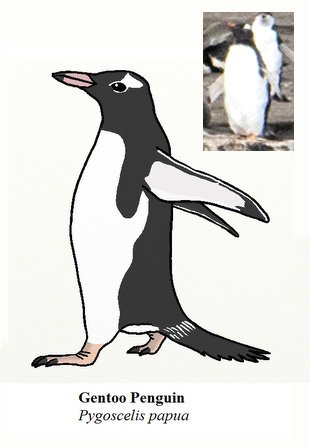 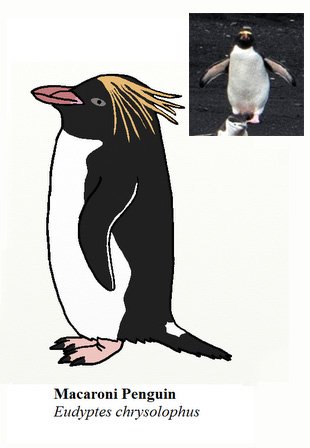 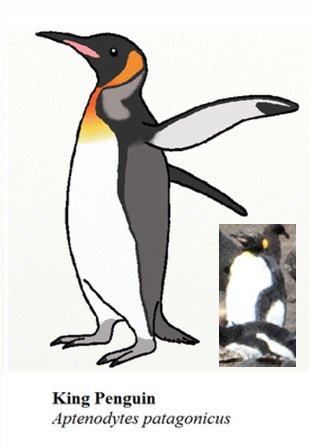 Five species of penguins were photographed using high-resolution professional equipment in February 2018 on Saunders Island in the South Sandwich Islands. As confirmed by ornithologists familiar with the area, it is very unusual to discover five species of penguin anywhere together, and on the South Sandwich Islands it is very unusual.

I first reached out to Ireland birding expert Jim Wilson, a highly respected ornithologist and ecologist with more than 40 years of experience. Jim has been to the South Sandwich Islands and I hoped he would provide us with an opinion. He responded, “Well it is very unusual to find five species of penguin anywhere together and on the South Sandwich Islands it is very unusual.”

Becoming more convinced of the rarity of Cindy’s photograph, I turned my attention to the significance of the find. Naturally, climate change and biodiversity came to mind. In my searching, I found a report from the Pew Bertarelli Ocean Legacy project named, “A Proposal to Fully Protect the South Sandwich Islands” which calls for the United Kingdom to reclassify the area and create a fully protected marine sanctuary. This looked like the exact place where Cindy’s photograph would be valued and could potentially make a difference.

On February 8, I reached out to the project team, leaving them a brief voicemail explaining the situation and asking if we could discuss it further. I updated Cindy and advised her to keep the images out of circulation until we could establish the right outlet for publication.

When she returned home, Cindy corresponded with Dr. Tom Hart, the head Penguinologist at Oxford. He was very helpful in passing along information about the South Sandwich Islands and the rarity of her capture. She also provided him with additional images from the trip showing the coastline after he expressed his concern over the condition of the island and penguin colony due to a recent major volcanic eruption.

Though Dr. Hart would not go as far as saying that hers was the only image of its kind, he believed at worst, there might be only a very small handful of similar shots in the world. “There are about 70-80,000 Macaroni, 2 million Chinstraps, several hundred thousand Adélies and a couple of hundred Gentoos spread across the South Sandwich. Also there are about 10 Kings, which pretty much always fail to breed. A photo with five species is certainly uncommon, but the SSI are the only place where you could hope to have five species in the same shot.”

On March 30, I finally connected with the Pew Bertarelli Ocean Legacy team. They were very interested in what Cindy had discovered and I immediately sent them the brief. Over the next few weeks, emails went back-and-forth at a rapid pace. Dr. Johnny Briggs, an officer for the project and their expert on South Sandwich Island, explained that he knew Tom Hart well, adding that very few people know more about the penguins of the region. He couldn’t say this was the only photo of such a scene in existence, but agreed there couldn’t be many. He was very clear, however, of the potential value of the photograph, and felt it could be of significant importance to their efforts.

In early April, Dr. Briggs wrote to us with some updates, again sharing his enthusiasm over the image. He explained he spoke with a colleague in DC about the photo, who in turn discussed it with global penguin expert Dr. Heather Lynch. Heather’s view was that the photo may not be that rare as four species are not uncommon altogether (Macaroni, Gentoo, Adélie, Chinstrap). Apparently though, seeing an Adélie and a King together is unusual–considering we see a true Antarctic species alongside a sub-Antarctic species like the King. Dr. Briggs concluded that the photograph supported their case for protecting the unique ecosystem of the SSI by offering visual evidence that the islands sit at the crossroads of the Antarctic and the sub-Antarctic. 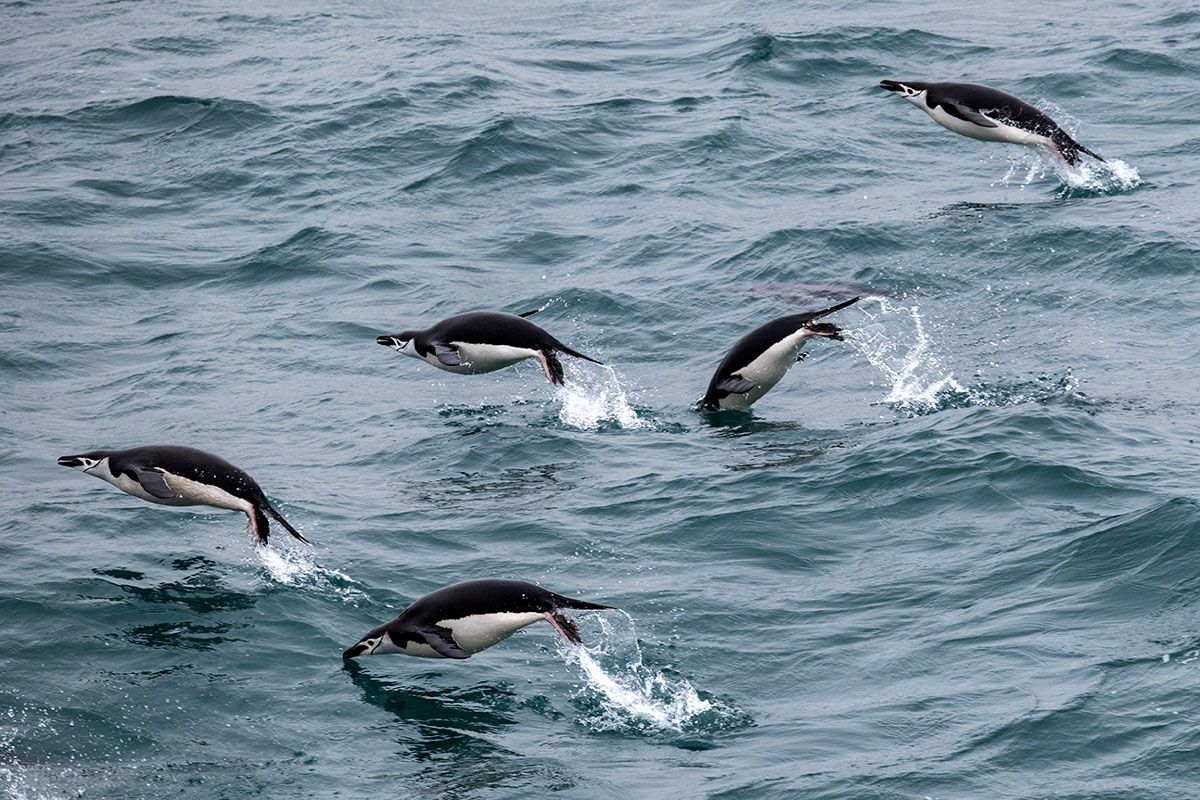 Taking note of all the expert feedback, we realized that although it might not be that uncommon to find four species of penguins on the same beach or island in SSI, it’s a different situation to have four—let alone five—species found physically close enough to each other to be photographed in the same frame.

The Pew Bertarelli Ocean Legacy Project agreed and has licensed Cindy’s image to build awareness for their campaign and to drive home the message—as only visuals can do—that the South Sandwich Islands is home to some of the world’s most significant wildlife populations and should continue to be void of mankind’s interference.

To inquire about licensing the images and this story, please write to jain@jainlemos.com.