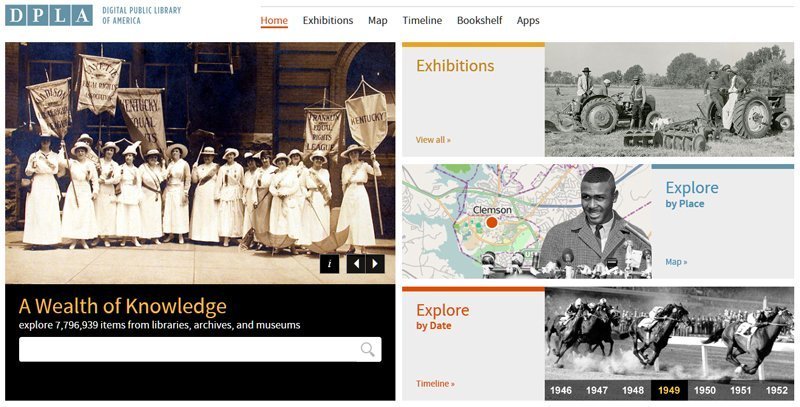 Headquartered within the Boston Public Library, the DPLA’s online experience for researchers couldn’t be better, but hanging out there is time consuming. That’s because you’ll want to spend just another hour or so looking to make sure you haven’t missed a perfect jewel. The digital repository houses dozens of collections and millions of records, including materials from many state libraries, the Smithsonian, the Medical Heritage Library and the Government Printing Office.

This month, the Getty Research Institute announced their contribution of nearly 100,000 new items to DPLA’s ever-growing fountain of history records. The J. Paul Getty Trust is one of DPLA’s content hubs, contributing the GRI’s metadata for digital images, documentary photograph collections, archives and books dating from the 1400s to today.

To become a hub, organizations are required to have an active feed to at least 200,000 metadata records that resolve to digital objects. These include online texts, photographs, manuscripts, artwork and other materials. If an archive doesn’t meet DPLA’s requirements, they can possibly join a state or regional hub. The Getty’s holdings are expansive, with millions of items, so they certainly qualify.

“We’ve included some of the most frequently requested and significant material from our holdings,” says Kathleen Salomon, assistant director of the Getty Research Institute. These include some 5,600 images from the Julius Shulman photography archive, 2,100 images from the Jacobson collection of Orientalist photography and dozens of art dealers’ stockbooks from the Duveen and Knoedler archives.

Salomon adds that more Getty archives will become available through the DPLA as their collections continue to be cataloged and digitized.

Here are a few gems from the new Getty material:

Julius Shulman was an architectural photographer from 1936 until 1986, known for the thoughtful manner in which he conveyed architectural design. Getty’s archive of his work documents the modern movement in architecture spanning several decades.

The Jacobsons have assembled one of the most extensive libraries in private hands devoted to the study of 19th century art photographs. Based in Great Bardfield, England, they’ve amassed an incredible collection and devoted a lifetime to studying the photography of India, China, the Middle East, Japan and Sri Lanka among other artist studies.

Absorbing to read are various documents from the Duveen Brothers firm. Their choppy cables are akin to reading Twitter posts and often convey equal drama. The collection preserves records of their dealings in transferring master paintings, antiques and art from Europe to the United States.

The dispatch above (dated nine weeks before the attack on Pearl Harbor) relays Duveen’s expectations for the price a George Romney portrait of Admiral Horatio Nelson might fetch. Of a higher concern might have been the difficulty travelling in England at the time.

To find your own treasures among the Getty Research Institute’s new items at the DPLA, start here.

Enter Lobster: Buttering up the Image Marketplace
Cashing in on Phone Photos: Enter Stockimo from Alamy